Ever want to pop into the source code of some gem that you are using?

Gem Edit is a nice and easy way to do this (if you aren’t using RubyMine, for example):

In the terminal, simply type:

And you will see: 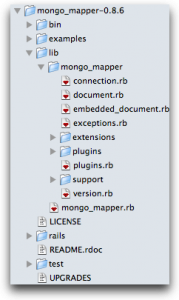 In an IDE, you can often get to the source code for a single method, but not as “completely” as with gemedit and TextMate, IMHO.

@martinstreicher gave me a good tip when using bundler (which I use on my Rails 3 apps):